Sea-Intelligence revisited its analysis of the eventual normalisation of supply chains and the potential impact on empty container flows.

The underlying data for this model comes from the Flexport Ocean Timeliness Indicator (OTI) data, which measures the time it takes from when the cargo is ready at the exporter to the importer’s delivery.

“Pre-pandemic, the transportation time was 45 days on average, peaking at a transportation time of 112 days in February 2022, which has since been reduced to 88 days, as per the measurement on 26 August 2022,” pointed out Alan Murphy, CEO of Sea-Intelligence.

As transit times lengthened, containers became tied up in the longer supply chain, which caused the initial increases in freight rates in the second half of 2020, as not enough empty containers could be moved to Asia in time. With a huge shortage of empty boxes, shippers had to order new containers to be built in Asia and then fed into the extended supply chains, according to the report.

As transit time is now reduced, these additional containers will again be released from the supply chain and begin to accumulate, mainly in Europe and the US. Sea-Intelligence predicted this development in February 2022 and this week analysed whether its prediction was on track. 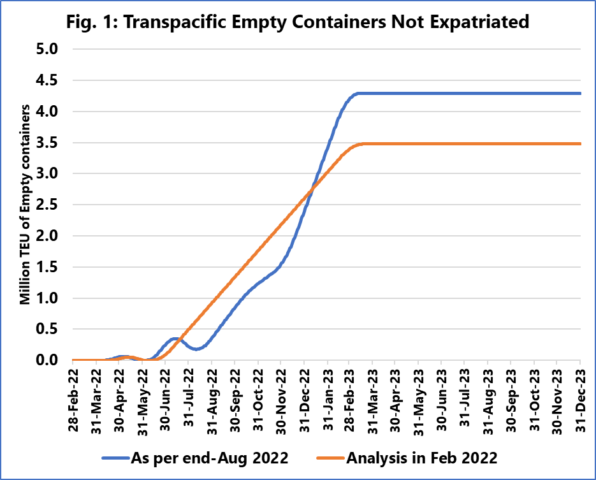 The blue line in the figure shows the company’s current forecast of excess empty containers to be released in North America, just from the Transpacific trade, and the orange line shows its projection from February 2022.

“If transportation time is back to ‘normal’ by early next year, we will see the release of 4.3 million TEU of excess containers into North America, which cannot be expatriated, within the planned network operations. This will potentially overwhelm empty container depots in the US, an issue which is already beginning to materialise,” noted Murphy.

To read the full original article, please go to: https://container-news.com/empty-container-problem-intensifies-reports-sea-intelligence/