The marathon of infrastructure auctions over the last month generated a total R$ 48 billion in new investments, to be made over the next 35 years. Altogether, in April, there were six days of bidding at the B3 stock exchange, 14 new concession contracts awarded and at least six injunctions (attempts to stop the auctions from going ahead) overturned.

Aside from the positive outcome of the auctions, some large local players were rewarded with the prizes – a trend likely to continue over the next auctions. Some of the winners were traditional groups, such as CCR, Santos Brasil, Ecorodovias, Aegea Saneamento and Iguá.

For some executives and analysts, it highlights the lack of new foreign players. Others note that there is an increase in investors interested in Brazilian infrastructure, and that they are using consolidated companies as a vehicle. 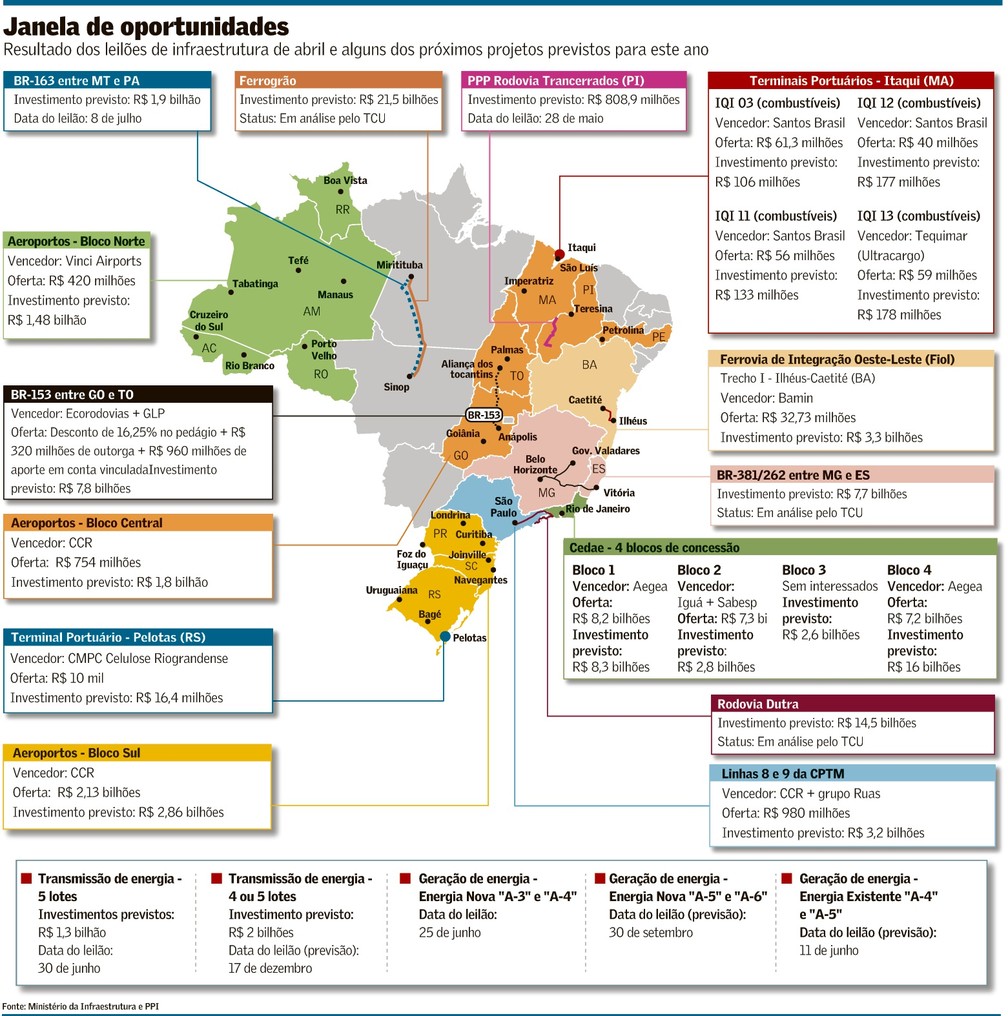 This can be seen, for example, in Canada Pension Plan Investment Board’s (CPPIB) acquisition of a stake in Iguá, in Itaúsa’s purchase of Aegea stock, in Singapore’s investments in Brazilian highways, in Italy’s Gavio’s injection of funds into Ecorodovias, and in the successful capitalizations of companies listed on the stock exchange, such as Santos Brasil.

“Foreign capital has invested massively in these auctions via national operators. It makes sense, because they are the ones who know the operation and the risks of operating in Brazil”, says Antonio Carlos Sepúlveda, president of port operator Santos Brasil, who successfully won the auction to operate three fuel terminals at the Port of Itaqui (MA), earlier in April.

This view is shared by Venilton Tadini, president of the Brazilian Association of Infrastructure and Basic Industries (Abdib). “The new investors are already here. Brazil has several good operators, so that will not be the bottleneck for the projects”.

Still, experts note that there are foreign groups, with capital and concessions’ experience, that have been probing the Brazilian market, but have chosen to not enter at this point in time. In the April auctions, there were some foreign companies that considered taking part right up to the last moment, but, in the end, decided not to participate.

For Marcos Ganut, partner at Alvarez & Marsal, it is important to understand the reasons for this reluctance in order to increase competition. “A part [of the fear] comes from the lack of knowledge of Brazil and from legal uncertainty. Those who are already here know how the regulatory agencies work, they have been toughened,” he says.

Given the poor logistics and sanitation infrastructure in the country, getting new entrants will be important, evaluates Rafael Vanzella, an infrastructure partner at Machado Meyer. “This is a moment to celebrate, but it is important to look to the future. The country has large groups, but the balance sheets are not unlimited”, he says.

In the sector, there is a consensus that the regulatory environment in Brazil has evolved in recent years, which has been reflected in the success of the auctions – for investors, good regulation means security regarding the rules and the certainty that what is written in the contract will be honored.

Even so, there are some classic cases that still frighten investors, such as the government attempt to take over the Yellow Line highway, from Invepar, in Rio de Janeiro, and the last minute injunctions on the eve of auctions – as happened again in the case of the Rio de Janeiro State Water and Sewage Company (Cedae). “To outside groups, it is very difficult to understand the extreme resistance from authorities and institutions”, says Vanzella.

The expectation for the next auctions is that local groups will continue to do well – given their access to capital markets, their higher risk profile and asset pricing experience as well as their need to guarantee long term cash generation.

In the case of CCR and Ecorodovias, for example, portfolio renewal is seen as an influential factor in the companies’ strategy, since both have important concessions coming to an end.

Santos Brasil has also made it clear they will continue to participate in the auctions and diversify their operations. “The country is experiencing a window of opportunities that is not always open. Let’s enjoy it,” says Sepúlveda.

In the water supply and sanitation field, all operators are looking forward to the expansion plan. Iguá, for example, which will double in size after winning the Cedae contract, is already planning to grow three or four times with other projects, according to their president, Carlos Brandão.

Looking ahead, there are a number of opportunities coming up in different sectors. On highways, there is a huge portfolio of large auctions, such as Dutra and the more than 3,000 km of roads in Paraná. In airports, the seventh round of concessions remains, which includes the “crown jewels” of the sector: Congonhas (SP) and Santos Dumont (RJ). On railways, the government is working hard to get Ferrogrão off the ground. In ports, there are a number of new leases, in addition to the privatization of port authorities.

In addition, there is the water supply and sanitation sector, which is expected to see a boom in projects over the coming years, in the wake of the changes brought about by the new regulatory framework. “We will see many new players in this segment, because there is huge demand and a lot of interest, both from financial groups, and from companies in other sectors,” says Fernando Vernalha, of Vernalha Pereira Advogados.

Despite extolling the importance of this wave of investments, Tadini, from Abdib, also adds some perspective to the situation explaining that the investments will be made over up to 35 years, and adds that the level of public investment in infrastructure, which has suffered successive cuts, continues at a dramatically low level.