HomeNewsAutomobile production at lowest level in February since 2016 crisis
Automotive

Automobile production at lowest level in February since 2016 crisis

According to the monthly survey by the National Association of Automotive Vehicle Manufacturers (ANFAVEA), despite all the logistical efforts made by automakers, the production of vehicles has not yet returned to the levels before the pandemic.

The month of February saw 197 thousand units produced, 3.5% less than in the same month last year and 1.3% below January. Since the 2016 crisis, there has not been such a low number for vehicle production for the month. The accumulated 396,700 in the two-month period is 0.2% higher than that of 2020, but this is due to the suspension of collective vacations in January this year by several companies.

“Many of our automakers worked even during Carnival to try to replenish low stocks and compensate for some delays and stops due to a lack of inputs, but there is still a lot of difficulty in resuming the normal pace of operations at the factories”, explained President Luiz Carlos Moraes. Inventories of vehicles at factories and dealerships at the turn of the month were 97,800 units, sufficient for 18 days at the current pace of sales, a figure still very low compared to pre-pandemic levels when inventories held a 30 to 40 day supply.

Worse than production bottlenecks was the cooling of the recovery in the domestic market. The licensing of 167,000 units in February represented a drop of 16.7% compared to the same month last year, and a drop of 2.2% compared to January of this year. The accumulated 394,500 units in the two-month period represent a 14.2% decrease. On the other hand, exports in the two months are at the same levels as last year, just over 58,000 units.

The good news of the month comes from the truck sector. The production of 11,800 units was 37.9% higher than in January and 29.3% higher than in February 2020. Licenses (7,800) grew 3.2% and 21.4%, respectively. In the accumulated result for the year, trucks registered an increase of 24.9% in production, 11.8% in sales, and 85.9% in exports, in comparison with the first two months of the previous year. Part of the good results is attributed to the strength of agribusiness and the expansion of the home delivery network. 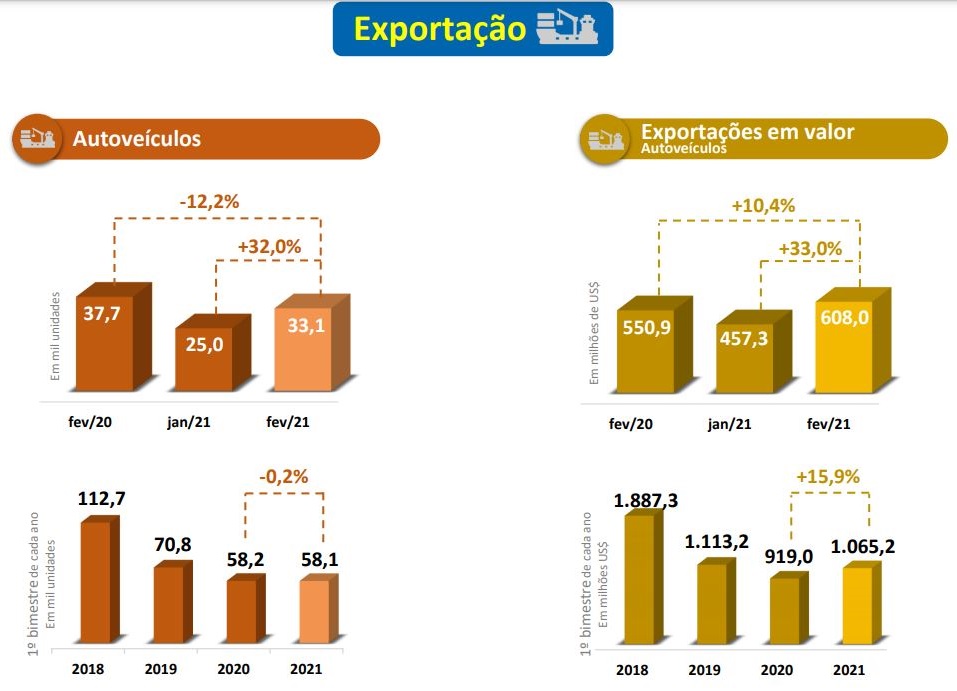