With joint collaboration from the China Machinery Engineering Corporation (CMEC) and Argentina’s state-operated Trenes Argentinos, the Belgrano Cargas cargo railway line has undergone a major revamp, including 580km of railway lines being renovated, and the addition of new Chinese-made locomotives and wagons to its existing fleet. The rail lines took two years to restore, with the future plan being to renovate a total of 1,700 km in Argentina.

The Belgrano line is a strategic network for agricultural exports. It handled 2m tons of cargo, including soy, cotton, corn, and flour, in 2018, up 66% YoY, according to Argentina’s Transport Ministry. The transit time from Salta to Rosario is now 8 days, compared to 18 days in 2015. 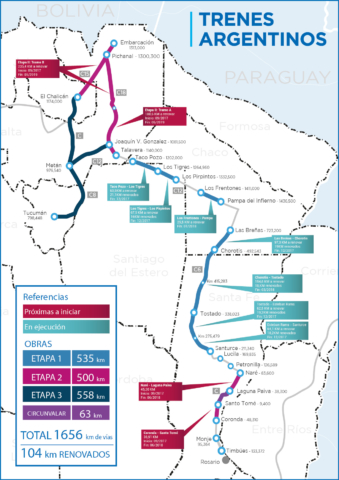 Recently, the South American country signed a US$1bn railway renovation contract with Chinese state-owned China Railway Construction (CRCC) to renovate a 1,020 km stretch of railroad that connects Rosario in the east with Mendoza province in the west.

With joint efforts from the China Machinery Engineering Corporation and Argentina’s state-run Trenes Argentinos, the rails, about some 580 km long, were renovated in about two years with new Chinese-built locomotives and cars incorporated into the system.

The ambitious project aims to revamp a total of 1,700 km of rail lines in the country.

The rest of the lines, which cross the northern provinces of Jujuy, Salta, Tucuman, Santiago del Estero, Chaco and Santa Fe, will be gradually renovated till April 2020.

“We are motivated by a good future outlook,” said Matias Duran, the project’s chief engineer, who was excited about the fact that project has also energized communities situated along the lines.

China is actively helping to improve not just the infrastructure of the tracks but also the rolling stock. The effort has significantly increased the country’s cargo capacity.

Argentina’s cargo rail system is composed of the Belgrano, San Martin and General Urquiza lines. The Belgrano lines alone transported 2 million tons of cargo last year, a 66-percent increase year-on-year, according to figures from the Ministry of Transport of Argentina.

The trains move agricultural goods, including soy, cotton, corn and flour, from the northern breadbasket to the export hub of Rosario, in Santa Fe Province.

In addition to increasing cargo capacity, the renovation work has helped cut down on transport times, with trains designed to reach the speed of up to 90 kilometers per hour.

In 2015, it took the trains 18 days to travel from Salta to Rosario. Today, the time has been cut to eight days.

“It’s very important because the type of project, once completed, can improve the whole regional economy, the whole northwest of Argentina,” said Guaymas. Enditem