Santa Fé Mineração plans to begin producing iron ore in the south of Bahia in the first quarter of 2024. The decision resulted from high iron ore prices and the possibility of having two logistical solutions for the production flow. The company aims to invest around US$ 100 million to build a unit between the cities of Brumado and Lagoa Real capable of producing up to 3 million tons.

Created in 2010 by executive Frederico Robalinho, Santa Fé Mineração was a mining arm of Brazil Energy, a company operating in the power generation sector and controlled by the Robalinho family. The executive then decided to separate the mining sector into its own separate entity, thus creating Santa Fé Mineração. Robalinho explains that since the separation, he has dedicated himself entirely to the mining company, while his sons managed Brazil Energy.

“I receive dividends from Brazil Energy and decided to invest them,” says Robalinho, adding that up until now, he met Santa Fé’s expenses with his own resources.

From now on, however, he admits that he will have to look for new forms of financing and is studying solutions. “We still don’t have a decision. It can be a strategic investor, or maybe we’ll go public. We have an exciting path ahead of us. We are looking at the best alternatives,” he says. 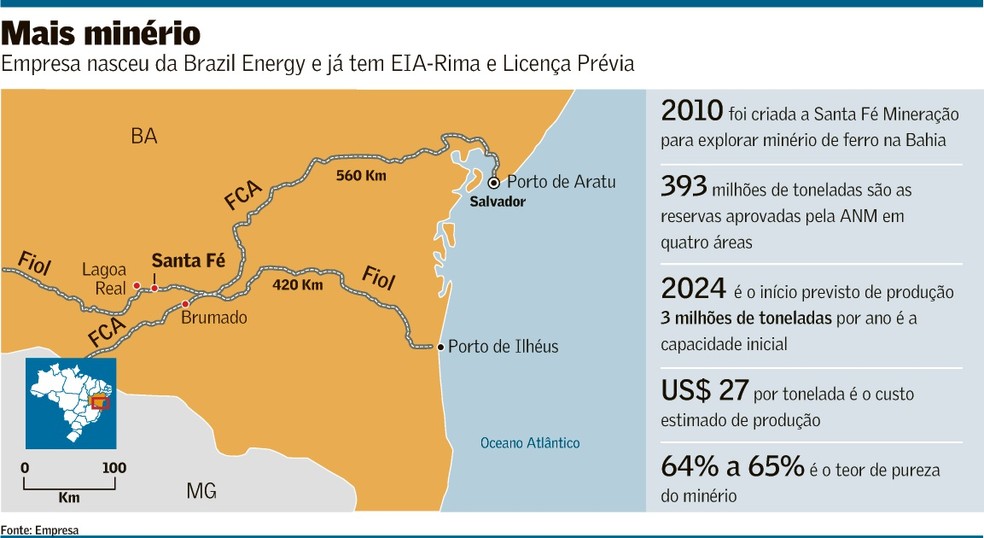 Santa Fé plans to start small until it reaches 1.5 million tons. The company has a memorandum of understanding with the Centro-Atlântica Railway (FCA), which passes through Brumado about 40 kilometers from the areas from where the company will mine the ore. The company analyzes whether the ore will be transported by trucks to the railroad or whether it will invest in conveyor belts leading to a terminal at FCA. The railroad will take Santa Fé’s production to the Port of Aratu, in Salvador.

The company expects to reach the unit’s total capacity –  3 million tons –  between two and two and a half years after the beginning of the activities. By then, Robalinho expects that the West-East Integration Railway (FIOL) will be in operation and should pass “almost over the top” of the Santa Fé areas, according to the executive, and will end up in the future Port of Ilhéus. The port and the railway were awarded the concession by Bahia Mineração (Bamim) and should be ready by 2025.

Robalinho avoids going into details about the environmental discussions involving the Bamin project – which includes iron ore mines in the municipality of Caetité, about 40 kilometers from Lagoa Real. Environmentalists have criticized the layout of FIOL, which will cross an ecological sanctuary in southern Bahia. There are also caveats regarding the construction of the port due to the risk of affecting mangrove areas in the region.

Robalinho states that he already has the Rima environmental impact study and the preliminary license granted for the four areas already approved by ANM ( the national mining agency), totaling 393 million tons of ore. In total, Santa Fé is entitled to 14 areas, with about 1 billion tons of resources.

In its favor, the company will use a type of processing that will not require dams, and the low-humidity tailings will be deposited directly in the pits. Robalinho also explains that he will install a solar power plant for the plant that will benefit local communities.

The executive expects to produce a “pellet feed” with 64% to 65% iron content and a cost of around US$ 27 per ton. According to Robalinho, the calculations to reach this value were “quite conservative,” and he is not afraid that an eventual drop in the ore price – which yesterday broke the record of US$ 230.56 per ton – will affect the business.

“That is why mining has a very high internal rate of return. In a maximum of four years, [the project] will be paid for. We have economic viability”, he says.

In the future, Robalinho considers raising production capacity to up to 10 million tons, with a total investment of US$ 400 million. “This would be an excellent level for a Brazilian company,” he says.