The National Industry Confederation (CNI) conducted a survey with exporting and importing companies to measure the impact of the new coronavirus pandemic on Brazilian foreign trade. The data revealed that the majority of companies were negatively affected. Among exporters, 57% registered a drop in the invoiced amount. Among importers and those that invest in foreign countries, the drop was even greater, at 70%.

The survey, carried out between June 2-10, evaluated data on 197 companies dealing in foreign trade in April and May and is the second survey done by the entity to assess the impact of the pandemic on Brazil’s foreign trade.

Despite the study showing a negative picture, in comparison with the first edition, the data indicates that the fall in the value of exports has slowed. In February and March, the drop in invoicing had been 80%, significantly more than that recorded in the months of April and May.  The forecast for the next 60 days is that exports of 36% of the companies consulted will be negatively affected, which points to a further slowdown in the fall compared with April and May.

Among importers, seven out of ten companies registered a drop in the value of operations and 26% of those affected said that they had retracted more than 50% in the last 30 days. Despite this, the projection for the next 60 days is that this index will fall by almost half (36%). The main impacted countries are China and the United States, both strategic markets for the industry. In these places, 58% and 29% respectively of the companies indicated that they reduced imports.

Among the companies that invest in the international market, 70% reported that they have reduced the allocation of resources abroad. The biggest drop was felt in China (35%), the United States (30%), and Germany (13%). From the perspective of the next 60 days, the biggest contraction indicators are also registered in China (44%) and in the United States (31%).

The survey also pointed out that the main concerns of internationalized companies with the effects of the pandemic are with the reduction of exports (24%) and production (19%), as well as the increase in the price of raw materials (15%). Among the nearly 200 companies that participated in the survey, 60% of them use maritime transport to export or import. Among them, the greatest difficulty has been the reduction in the frequency of ships, pointed out as a problem for 39%, followed by the increase in the value of freight (27%). Only 23% of the companies that use this transport mode said they did not face problems. 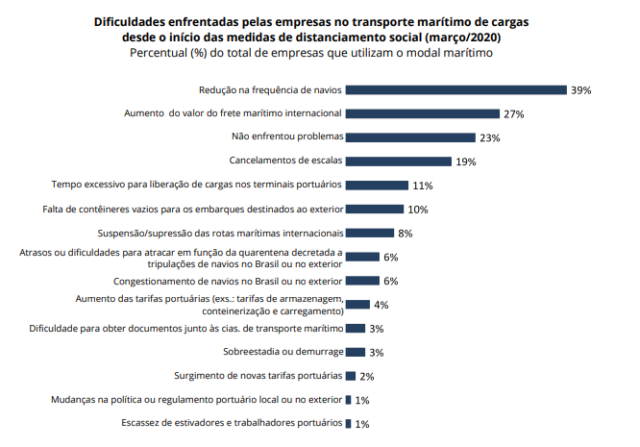