A survey by ANFAVEA (the national association of motor vehicle manufacturers) released on November 6 shows that the recovery seen in September continued in October, with high volumes of licenses and production. The recovery is taking place during a challenging time for the automobile industry, and projects year-end figures very close to those of the projections made by the entity.

Exports grew in October thanks to the resumption of neighboring markets after a prolonged quarantine. A total of 34,882 vehicles were exported, a growth of 14.3% over September, and 16.4% over October 2019. The accumulated shrinkage in 2020 is at 34.2%; the association forecasted a shrinkage of 34%.

“The results of October reveal the efforts of the industry to meet the growth in demand in some market segments”, said Luis Carlos Moraes, President of ANFAVEA. “We have many challenges to achieve a more vigorous recovery, such as the new factory protocols, the difficulty of planning the medium term, the rise in costs, and, recently, the lack of some inputs”, said the leader.

The agricultural and road machinery sector, less affected than the auto sector, recorded a 9% increase in production (4,919 units) compared to September. Much of this increase was due to exports of 901 units, 21.1% more than in the previous month. Domestic sales (4,530) decreased by 5% in October. Cumulative sales through October grew 1.6%, but production and exports fell 18.1% and 32.1%, respectively. 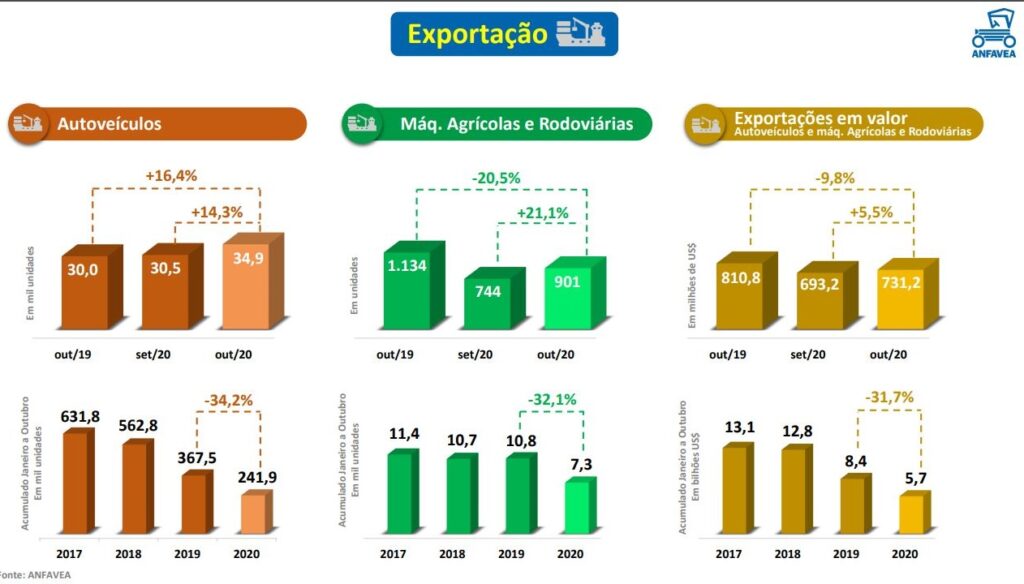