Data released by the National Association of Vehicle Manufacturers (ANFAVEA) on Wednesday, October 7, indicate that September was the best month of the year in terms of vehicle production and sales. September closed the best quarter of the year, following successive negative records in the second quarter which was highly impacted by the new coronavirus pandemic. With three months left to close, the entity redid its projections for 2020, indicating a scenario that is not as bad as was predicted in the middle of the year, at the height of quarantine and unpredictability, when drops of 40% or more were expected.

Despite the recovery in recent months, the new projections still point to sharp declines in all indicators. The estimated production for this year is 1.915 million units, down 35% over 2019 and the worst year since 2003. ANFAVEA’s expectation for the domestic market for new vehicles (cars, light commercial vehicles, trucks, and buses) is 1.93 million units licensed during the year, down 31%, and the worst result since 2005. In terms of exports, it is estimated that 284,000 units will be shipped, 34% less than last year, and the worst volume since 1999. For agricultural and road machinery, the projections are a little better, with a 5% growth in sales, but a 4% decrease in production and a 31% decrease in exports.

“It is still a relief in view of the situation that we saw at the beginning of the pandemic, and we credit this mostly to the gigantic injection of money made by the federal government through emergency aid, which made the economy revolve faster than expected”, explains Luiz Carlos Moraes, President of ANFAVEA. “Even so, we will have a dramatic drop in all industry results in 2020, even though the last quarter is expected to be good, as was the third,” he adds.

The September results consolidated the recovery of the third quarter, bringing some relief to the entire automotive chain. The production of 220,162 vehicles was 4.4% higher than in August but 11% lower than in September 2019. The 9-month cumulative results showed a decrease of 41.1%. The domestic market ended the month with 207,710 licensed units, an increase of 13.3% over the previous month, and an 11.6% decrease in comparison with the same month last year (an accumulated drop of 32.3% for the year).

Poor export performance contributed to lowering production numbers, which, even in the last quarter, failed to repeat the levels of the first three months of the year, projecting for 2020 the worst result of this century. In September, 30,519 vehicles were shipped, up 8.5% over August but down 16.7% in comparison with September 2019 (a 38.6% contraction for the year).

For the last quarter of the year, ANFAVEA expects numbers similar to those of September. “If on the one hand there are positive signs, such as the reduction in cases of COVID-19, increased demand for individual transport, and the traditional heating-up of the market at the end of the year. On the other hand, there are risks such as the reduction of emergency aid, the fall in income levels, high unemployment, and rising inflation”, stated Luiz Carlos Moraes. 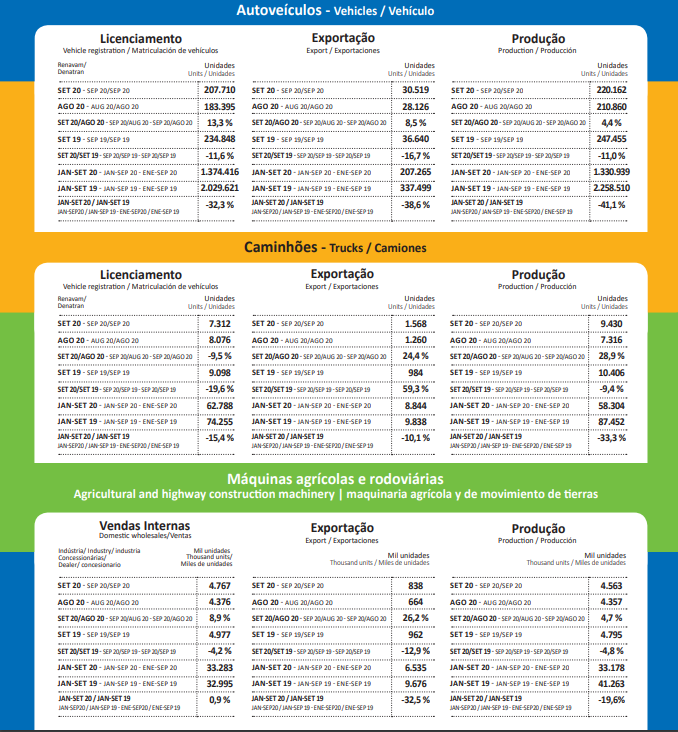